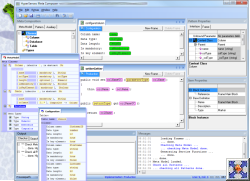 Copy-Paste-Adapt is the most common used method to solve similar tasks or to create variants of a system (product lines or system families). The disadvantage of the method is that tasks like error correction, changes, enhancements, etc. have to be repeated for every variant. This is a time consuming, error prone and accordingly expensive way. The usage of domain specific languages (DSLs) and generators avoid those disadvantages.

HyperSenses is an environment which utilizes the advantages of model driven development to create tailor made DSLs and fitting generators. It allows developing generators for arbitrary programming languages, wherein reuse of usage-proven solutions is a central element.

HyperSenses is available as stand-alone environment and as plugin for eclipse.

Some of HyperSenses’ advantages are:

Contact us if you like to lear more about HyperSenses. We also support you to transform existing systems into generative systems.

"HyperSenses has enabled HT Applications to support of a manifold of platform and customer variants of our smartphone apps without the burden of implementing the same functionality over and over again."
Hessel van Tuinen, CEO, HT Applications, The Netherlands

Copy-Paste-Adapt seems to be the most commonly used method to implement similar solutions or variants of a system (to simplify matters, the term ‘software family’ is used when talking about similar solutions or a set of variants, a single member of a software family is referred to as variant or instance). But the disadvantage of this method is that every task, e.g. correction, change, enhancement, has to be repeated for every variant which is error-prone and time consuming as well as expensive.

However, most generator technologies require quite experienced developers. Often developers do not accept generators because the generated code is hard to read and maintain. Business-specific programming guidelines are rarely fulfilled by generators. 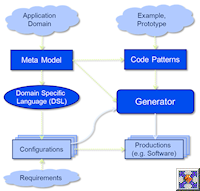 Developing a DSL is often regarded as a simple finger exercise. If the DSL has to be extendable, the task gets a bit more tricky. But as soon as a DSL and a generator have to fit to each other, their development transmutes from a simple finger exercise to a time consuming challenge for an experienced developer. Everyone who is going to use the new language first has to spend some time to learn it. Depending on the language’s complexity this familiarisation process can require quite a high effort.

Not until generator and DSL are completely developed, a testable system is available. This means (conceptual) errors will be found at a very late point of the developing process which in the worst case results in an expensive correction. In addition, the long development phase and the late availability of a testable system impede the usage of generators and DSLs in combination with agile methods.

Due to this reasons many companies avoid the usage of generators and DSLs and use Copy-Paste-Adapt instead.

When developing HyperSenses, we aimed to overcome the above mentioned weaknesses of the development of generators and DSLs. In concrete, the target was to develop a generator technology

The concept’s central element is a meta model. This model describes the variable parts of the application domain of the system family. It contains solely the variable parts, which differentiate the individual members of the family. In contrast to other approaches, invariant parts are not modelled in the HyperSenses meta model, the modelling effort is therefore reduced significantly. A meta model can be created in HyperSenses itself or created within an UML-case tool, imported via XMI interface and edited in HyperSenses if necessary.

“I’d never program it that way…”

… might be the most commonly used argument from software programmers against the usage of a generator. As the (generator) developer himself defines the target language and code as well as its formatting, this argument doesn’t hold in HyperSenses. The developer’s definition ensures the readability and maintainability of the generated code and the fulfilment of company-specific programming guidelines. Also important, the look and readability of the code increases the acceptance of the generator by programmers.

Expert knowledge for everybody

This is achieved by using code patterns which specify the language dependant parts of the generator. Such a pattern is derived from existing code (or code fragment), the underlying concept is called ‘pattern by example’. Existing implementations or prototypes, developed and optimised by an expert and possibly already usage-proven, are the basis for code patterns.

To create a code pattern, the code is searched for variable parts which differentiate single members of the system family. Those variable parts are exchanged by slots or optional code blocks which are linked to the meta model. Due to the linkage between meta model and slots respectively optional blocks it is only possible to generate code which is valid within the according application domain.

In this way, the expert knowledge is shared between all developers of the team, especially those with less experience, and can be easily reused and extended.

Specifying generators instead of programming them

The meta model describes the variable parts of the application domain of the system family including their relationships. The code patterns describe the code to be generated and its formatting. Due to the linkage of the patterns to the meta model the necessary navigation is implicitly given.

Thus, the meta model and code patterns contain sufficient information to enable HyperSenses to automatically create the generator, i.e. instead of tediously programming the generator it is simply specified.

You’re an expert in building generators and expected a long description about the programming of the generator as usually when a new technology is introduced? Sorry, in HyperSenses you just have to press the correct button and there is therefore no need for a long explanation.

To create a certain instance of the system family, the generator needs to know how to calibrate the variable points. This calibration is task of a configuration which is described by a DSL. Generally, developing an extendable DSL and generator, where DSL and generator fit to each other, is nearly a secrete science. For this task, a developer needs significant knowledge about the creation of consistent languages and plenty of time. This is not required in HyperSenses. What can or has to be configured and how is specified by configuration patterns, i.e. they specify the DSL. Like code patterns they contain slots and block which are linked to the meta model. In addition to support the end user of the DSL it is possible to add explanatory text within the configuration patterns.

Using a DSL as simple as ordering something on the internet

Depending on the DSL’s complexity the familiarisation effort for the language can be quite high until a first configuration can be written. HyperSenses bypasses this obstacle by introducing form-DSLs which are similar to electronic forms known from the internet for example. Such a form-DSL is easy to read and fill-in for the user and unambiguously evaluable by the generator, particularly only syntactically and grammatically correct input is possible. To further improve the readability of a form-DSL, its optic can easily be manipulated.

As soon as a part of the meta model exists, the patterns (code as well as configuration) can be developed. This development can be done distributed. It is possible to change, extend or enhance the meta model and all patterns at any point in the development process with only little effort. Likewise, it is possible to create an executable generator and/or DSL which can then be tested at any time. Thus, HyperSenses supports a stepwise development as e.g. required when agile methods come into play.

From stand-alone to integrated

HyperSenses can be run as stand-alone tool as well as integrated into another development site like Eclipse or VisualStudio. It is also possible to exchange the meta model with other case tools via HyperSenses’ XMI interface. 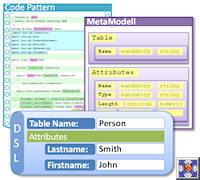 Development with reuse for reuse

Deriving code patterns from existing code (fragments) has at least two advantages. At first, established and optimised solutions which were developed by experts can be reused and extended. At second, the expert knowledge is shared with anyone of the development team especially with less experienced developers.

HyperSenses scales for small (sub)tasks as well as for huge overall systems. Even for small sized or specialised tasks or projects, development and usage of generators and DSLs become profitable.

The usage of code patterns leads to the fact that the developer defines how the code has to be generated for a certain task, thereby also the readability of the generated code is determined. In this way, the acceptance of the generator is increased significantly. In addition, this method ensures that company-specific programming guidelines are met by the generated code.

In contrast to other generator technologies, HyperSenses strictly distinguishes between production instructions and target code which results in a higher readability and maintainability of the generator’s specification.

The simple derivation of patterns (code as well as configuration) allows the development of generators and fitting DSLs even without expert knowledge. DSLs and generators do not have to be tediously programmed instead they are specified. Using this specification, DSL and generator are automatically created.

To create one’s first configuration, no long lasting familiarization with the DSL is necessary, because HyperSenses offers the notion of an easy to use form-DSL which ensures syntactically and grammatically correct configurations.

Predicate BEST OF for HyperSenses

The expert jury of "Initiative Mittelstand" (Initiative for Small and Medium-sized Businesses) awarded HyperSenses with the predicate BEST OF 2013 and 2012! With the INNOVATION AWARD IT, the “Initiative Mittelstand” awards enterprises whose innovative IT solutions provide an especially high value for small and medium-sized businesses. The software generator development environment HyperSenses has particularly convinced the jury and thus belongs to the top group out of more than 2,500 applications submitted.

With HyperSenses, Delta has made a Model Driven Software Development Environment especially for the domain of the software generators. In this way it is possible to develop high quality

White Paper about HyperSenses: HyperSenses simplifies the development of generators and DSLs and supports their stepwise and distributed development. First results are obtained, testable and

Do you have further questions or would you like more information about our products? We are gladly there for you!

This email address is being protected from spambots. You need JavaScript enabled to view it.
www.delta-software.com

Leave us a message:

Stay up to date with our Newsletter:

This email address is being protected from spambots. You need JavaScript enabled to view it.
www.delta-software.com

Stay up to date with our newsletter, which appears several times a year

We would like to inform you and not "fill in" - you can of course unsubscribe at any time.